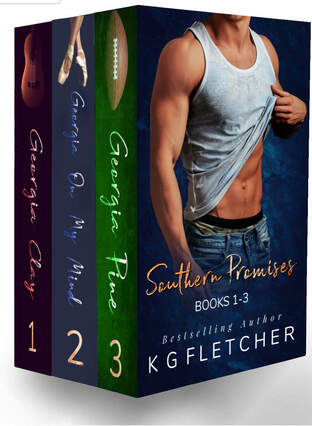 Snuggle up with these full-length standalone romances
full of chivalrous men and their strong, Southern women.

From bestselling Author, KG Fletcher, comes three standalone contemporary romances
with plenty of Southern steam. Take a chance on these hot men
​and the women who are as cool and refreshing as a tall glass of sweet tea. 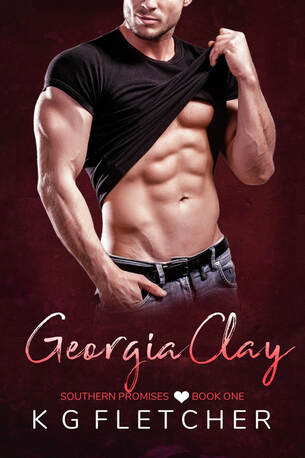 ​He’s a handsome songwriter rubbing elbows with the elite stars of country music. She’s a workaholic southern beauty who loves her career. Can the two find harmony in the heat of the Georgia summer?

Everybody in Nashville knows Georgia Clay. He’s won every award imaginable, penning hit after hit for the top stars in the world of country music and beyond. But even with his incredible talent, he’s hesitated to perform in the spotlight for fear his debilitating childhood secret could derail his success in the music biz.

Katie Parker is on a mission. Nothing can stop her from fulfilling her dreams of climbing to the top of the corporate ladder. But after showing up at her high school reunion, the last thing she expected was to end up in the bed of Clay’s pickup truck talking till dawn. So when she realizes she has feelings for him, she’s quick to accept an invitation to Nashville to see him play some of his hits at the infamous Bluebird Café for a songwriter showcase.

Forging ahead in a passionate long-distance relationship, Clay admits to Katie she had his heart a long time ago. And Katie learns about Clay’s heartbreaking childhood secret that’s kept him off the main stage. Emotions run high as she tries to convince him to sign a record deal of his own, making a promise to be by his side every step of the way.

Will Katie’s drive and encouragement finally be the reason Georgia Clay takes a chance in his career? Or will her ambition and the demands of Clay’s high-profile life leave them with nothing more than a lingering melody in a hit country song?

Georgia Clay is the first book in a series of standalone contemporary romance novels. If you like steamy friends-to-lovers stories, and heart-wrenching feels, then you’ll adore KG Fletcher’s country music romance. 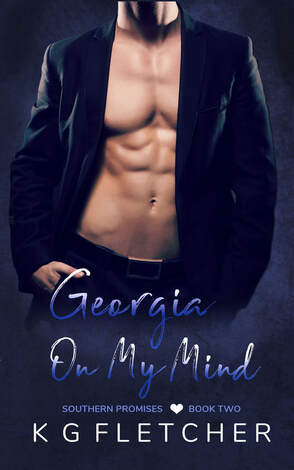 First rule in business - never let them see you with your pants down.

Hartford Parker is a disgraced real estate broker hiding out in his sister’s condo in suburban Atlanta. Swearing off women after an embarrassing indiscretion at a black-tie event, Hart now indulges in drinking and working out as he tries to come to terms with his unexpected firing at a prestigious DC firm.

Across town in a run-down and forgotten part of the city, Gia Bates is struggling to make ends meet at her failing dance studio. Secretly working part-time as a Marilyn Monroe impersonator for a seedy entertainment company has Gia feeling trapped in her debt, while slowly chipping away at her passion and solace in dance.

The handsome playboy and the dancer with legs-for-days find themselves at the same party and end up on an uncertain path full of sex, secrets, and shame.

As they move forward in a spicy tango, can the two of them ever dance in sync? Will they fight for their own happily ever after or will Hart be left with nothing more than Georgia on his mind?
​
Georgia On My Mind is the second book in a series of standalone contemporary romance novels. If you like steamy opposites-attract stories, and heart-wrenching feels, then you’ll adore KG Fletcher’s dancing romance.
BUY GEORGIA ON MY MIND
goodreads tbr - GEORGIA ON MY MIND
GEORGIA ON MY MIND BOOK TRAILER
GEORGIA PINE ~ Southern Promises ~ Book Three

​​The agony of defeat never felt so real.

Never in a million years did Jessica Kaufman think she’d end up divorced from her real-estate mogul husband and left to raise four young daughters on her own in an affluent Atlanta subdivision. The very last thing she expects is an encounter with her gorgeous gardener who looks more like a sexy beast from her daughters' favorite Disney movie. She is smitten with his evergreen eyes, wild mane of hair and impressive stature.

Tim McGill is in hiding, his reputation and celebrated career on the West Coast left in shambles. He moves far away to distance himself from his downfall, and inconspicuously tends the upper-class landscapes to keep his renowned identity a secret. Unlike his typical wealthy clients, Jessica doesn't seem to mind that he's a gardener. One spark between them is all it takes to ignite a fiery passion that could explode if Tim’s identity is revealed. He must earn Jessica’s trust and finally come to terms with what he has lost.

Can Tim open his heart wide enough to let in a beautiful mother and her four little girls? Or will his Southern Belle turn her back on him and walk away from their happily-ever-after?